Relationships, our lives are built on them.

My Facebook says I am “in a relationship”.  This refers to my relationship with my partner, the man with the other end of our red string, but really, technically speaking, everyone on Facebook could say the same thing… every one on the planet could.  From birth to death we are making (and breaking) relationships.  Some are fleeting and some last a lifetime, they evolve, deepen, strengthen and weaken but they are an intrinsic part of who you are.  They can be with anything, animal, vegetable, mineral, emotion, location…. so when I was given the topic of “relationships” to discuss for the #BloggerThinkTank topic of the month it took me some time to work out how to approach it.  Should I talk about my familial relationships? Explore how relationships have changed with the advent of social media? Or maybe get a bit romantic? Or how about my relationship with myself, indulge in a little navel gazing?

None of them felt right and, to be honest, they all felt a bit too much like hard work.  As I gazed around my little “Dizzy Cave” my eyes settled on this purring feline fiend… 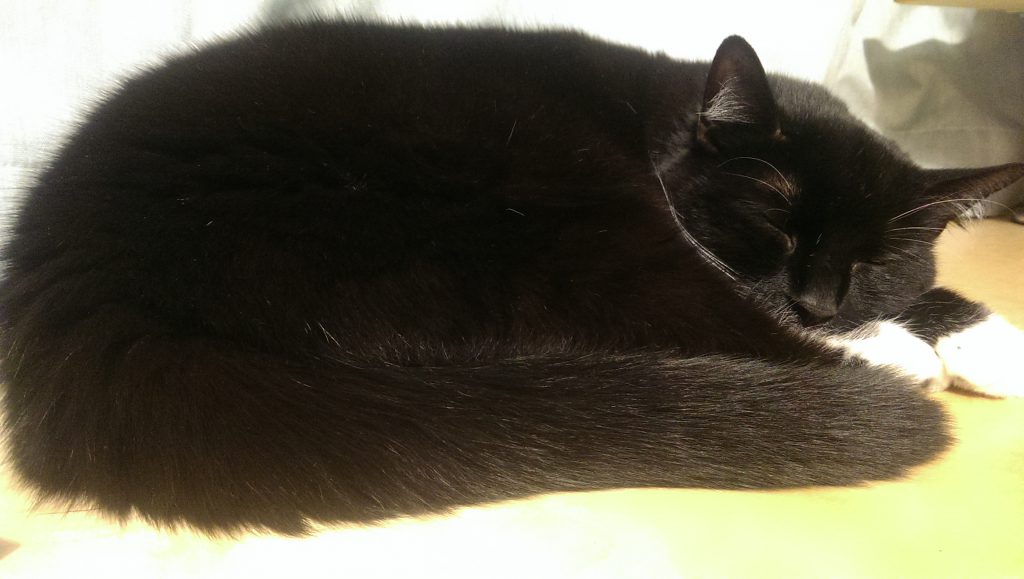 The single most consistent relationship I have had since I moved to this area has been with this not-so-young-now lady.

I moved to this area, several hundred miles from my nearest family member, with my now-ex boyfriend in 2005.  We were supposed to be here 6 months.  Yes, I know.  When we made the decision to extend our temporary stay to a permanent relocation he convinced me that we should get a couple of kittens.  After toying with the idea of getting a couple of Bengals from a breeder he decided that he couldn’t wait and so we headed off to look around our local shelter.

There weren’t many kittens available and none of them were quite old enough to be re-homed for a few weeks.  It’s not the largest of shelters.  We went to one pen which had five bouncy little black and white balls of mischief in it.  Only one was still available, the smallest of them all. a tiny scrap of a thing with a little white mark under nose.  I never considered myself a cat person but when I was offered the chance to hold her I took it and that was when Tash chose me.  Sitting in my arms she very shyly raised her head up to sniff at my nose, causing everyone in the room to smile.

Fast forward a few weeks and the little black and white cat with the BIG purr and her new fluffy tabby friend were exploring our living room – their new home.

Since then, Tash has been through four house moves and lived with three other cats.  She’s had her share of health problems (at one point I thought I was going to lose her) but she has fought back each time.  She bonded well with the man (he dotes on her) and tolerates the dog and the four of us now live together (mostly) in harmony.

How would I define our relationship though? I consider myself to be her guardian, rather than her owner.  She is mostly a house cat but she does enjoy going outside (she’s a nosy devil) and I am very aware that she chooses to stay with me as much as I chose to take her with me when I left my ex.  I reckon she thinks she is the boss of me.  I’m not convinced.

Whatever either of us thinks, I know I wouldn’t be who I am right now if it wasn’t for her.  Yes she can be a brat; she does the stinkiest farts, snores very loudly, wakes us up demanding food and has a very malevolent stare when she thinks you are ignoring her, but she wouldn’t be Tash (or anywhere as interesting) if she was “perfect”. This black and white moggy who can’t miaow properly and makes sounds reminiscent of a Clanger (and drops smells like a demon) will always will be – the “baby girl” or “keettan” (the dog gets called “puhpay” because it makes me chuckle to say it).  Tash loves to cuddle up to me, a favourite seems to be to sit on my chest purring loudly whilst headbutting me and/or tapping my face with her paw.  That tapping and headbutting can get annoying if it is interfering with something that I am trying to do (like sleep) but when I was really struggling with depression and anxiety I know having her there just “being” stopped me getting so so much worse than I ever did.

She turns ten later this year, a “senior” cat now according to all the cat food brands.  I still see the fluffy ball of wind that tiptoed her way out of a cat carrier on to the cream carpet of her new home in December 2006.

What do you think?

This post is part of the Bloggers Think Tank members’ April 2016 brainstorm on “Relationships”.  To find out more information and explore the other members’ ideas check out this month’s post on the BTT blog.  Want to take part in next month’s Think Tank? dm @IMustacheYouQ and join the group chat.