“She opened a little door and Dorothy walked boldly through and found herself in a wonderful place.”

I don’t think I know anyone who doesn’t like to receive a parcel of goodies.  I like it even better when the goodies I receive have a bit of mystery about them.  I guess that is why I enjoy my Glitterati box subscription and why I have been so excited to receive my first House of Wonderland Jewellery Club box this month.  I just had to share this with you!

I learned about “the UK’s first jewellery club” through  #TheGirlGang and when I realised the theme was The Wizard of Oz[A], well I just couldn’t resist.

They also offer an “Add earrings” subscription, as the standard boxes don’t include these (not everyone has their ears pierced after all).  I decided to forgo this time.  Jewellery Club boxes ship later in the month than other box schemes I have tried out so that was something a bit different too. 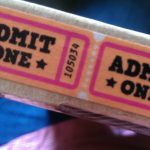 Washi Tape adds to a little something to any package.

Following  HOW on Instagram, I knew that the box had been dispatched and it arrived at my house (to be signed for) today (Friday).  This was little unexpected as I was not used to needing to sign for any subscription boxes I get.  Unfortunately no one was home in the morning so a Red Card of Sadness was left, however we have a very thoughtful postie who, later that day as he was heading back to the delivery office (which is about two minutes from my house) spotted that my partner was back and so I had a lovely Parcel of Joy waiting for me when I came home from work! 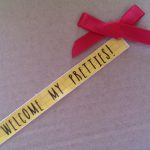 What a nice thing for a box to say…

Good things may well come in small packages, but they also come in ones that are wrapped up in fun and interesting ways too.  I think the way someone wraps something says a lot about them (for example, I always want mine to be neat and tidy but never are).  I loved the idea of using the “Admit One” ticket washi tape as part of the packaging of this box.  It was like it was reinforcing that the box was for me and no one else.  Ok, so no one else in the house is likely to wear Wizard of Oz themed goodies (the cat just can’t pull it off and the dog prefers Alice in Wonderland*) so they are unlikely to think it is theirs, but hey.

When I had got the box opened (I was taking a lot of care because I didn’t want to spoil that tape!) and moved the receipt out of the way I found that the main contents were encased in a rather appropriately designed tissue paper, whilst a little greeting and a clue to next month’s box were stuck to the inside of the lid.  Even at this point, with the amount of thought that had been put into the unpacking experience, it was obvious that the HOW team thoroughly enjoy putting these boxes together.  Inside the wrapping paper was a multitude of items, some in their own wrapping (parcels inside parcels=more fun!) topped off with a “sprinkle of magic” provided in the form of DottieStarling’s Wizard of oz recycled book confetti.

Let’s get a look at the goodies! 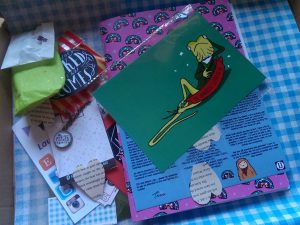 So much to discover!

Of course the first thing that is immediately obvious is that there is not just jewellery in this box!  My eye was immediately drawn to the mini print that had been specially designed by Tess for this box.  It is already stashed ready to head to work with me on Monday to brighten up my desk.  Moving on, I decided to investigate a small package labelled “Something wicked comes this way”. I realised just before I opened it that it was a bag of lemon flavoured sherbet (aka Yellow Brick Road Sherbert (Fairy Dust)). 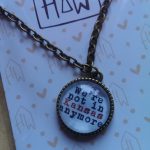 Disaster (or, at least a significant mess) averted I decided to check out the necklace.  This has a cute charm on it; the words “We’re not in Kansas anymore” printed on to a white background under a clear glass dome give the effect of looking through a magnifying glass at some small print.  The chain that it is provided on isn’t too long either, which means it will work well with the collared shirts and blouses I wear to work.  The brass effect of the metalwork lends the whole piece sepia tones reminiscent of Kansas in that film. 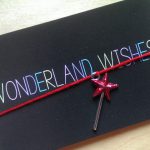 I had a tini “squee” at the next item I pulled out of the box – a red string bracelet with a little red wand.  The colour of this “Wonderland Wishes” bracelet symbolises a wish for strength and passion apparently.  Putting that aside, red is my favourite colour and red string itself has some significance to me because of The Red String of Fate.  Myself and my partner describe the day we met as our “red string day”.  If I can work out a way of wearing this bracelet so that it doesn’t interfere with my work then it could well become a staple piece of daytime jewellery (as well as being worn on nights out).

The next two things I looked at I found less exciting.  I’m not entirely sure where to start with the “Dorothy” nail decals (a blue gingham design) and I suspect they may well get passed on to the oldest niece or the stepdaughter (if I don’t wreck it when I do a trial myself).  As much as I love the “Somewhere Over The Rainbow” notebook it is irritating me that the paper isn’t all cut to the same length, so I have a section of paper which is not covered by the… errr… cover.  I can see me passing this one over to the stepdaughter too. 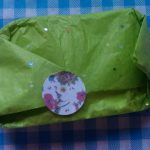 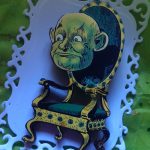 Package opened an an amazing brooch from Laura’s Jewellery, maker of fine wooden jewellery, is revealed.

BUT there was more still to come from this box! A mysterious green package gave way to a wooden brooch designed by Laura from Laura’s Jewellery.  At approximately 6cm “tall” this not-so-little item is not for someone who wants to be subtle about their love for Oz.  The design itself is actually based on an illustration from the original book and shows the “Wizard” on his throne in all his hideousness.  I have no idea how/when I am going to wear this but in the mean time I am putting it on display on the bookshelves in my study as something like this should never be stashed away!

A ruby slipper for your wrist.

But wait… there’s still more.  opening a tiny red envelope reveals the “Glitter Slipper Charm bracelet”.   This white metal chain-link bracelet is adorned with a simple resin charm.  With a nod to the 1939 film, this is a cute little red sparkly shoe.  Oz purists will know that Baum gave Dorothy silver shoes to wear in his book, but Judy Garland’s iconic ruby slippers could not be left out of this box purely for the sake of accuracy, now could they?

With only a couple more mysteries of this box to be revealed I unwrapped what is probably my favourite piece.  The limited edition pin. 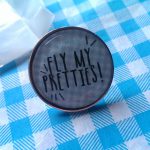 This is an approximately 2 1/2 cm diameter metal disc.  The background is “Dorothy blue” gingham and it is finished off with the smile inducing phrase “Fly my pretties!”. Now if anything was going to properly start me collecting pins, this would be it.  I have already attached it to a lanyard (it has the very fitting Cath Kidston “mini cloud” design on it) which I use for work so look forward to showing that off on Monday.  I am also having to stop myself for binge-shopping cute pins now as well.

And so to the final envelope; a larger green “emerald” one (which was actually really difficult to open so I was terrified of ripping whatever was inside). 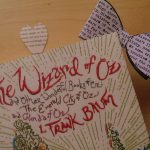 I was glad I was careful, as this was the papercraft part of the box – a template for making paper bow paper clips.  These are designed to make paper bows which can be used for placeholders/bookmarks.  On just one sheet there were two ready-to-cut bows, instructions and also a template for making more bows in the future out of whatever paper that you fancied.  I lacked the glue and large paperclip really required to make this but had a crack at it anyway using micropore tape (yes, really) and a standard sized white and blue striped paperclip I have in my stash.  As you can see from the photo, the smaller paperclip doesn’t work quite as well (it means that the bow sits best at a jaunty angle on the corner of the book) but who cares?  I suspect I may be investing in a few larger paperclips and deploying this idea at work to help me keep track of things in my notebook…

So the final verdict? All in all I am pretty pleased with the haul with this box.  It’s not just jewellery but lots if other goodies too and the way that the HOW team package their goods shows a real attention to detail and, above all, pride in what they do.  I paid £19 (plus postage and minus a discount that was running that day) for this month’s box and I definitely got my money’s worth – the goods in the Wizard of Oz box were worth at least £45 if bought individually.  It gets a solid 9/10 (marked down because of the notebook).

Will I buy another box again? That depends on the theme and the money situation.  I’m not committing myself to a full subscription yet (mostly because of my own budget) but I am intrigued by the hint of what is going to be in May’s box…. 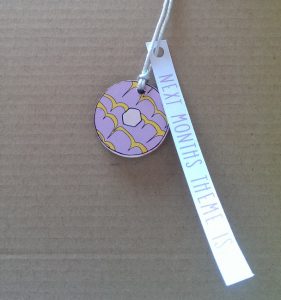 Hint for the HOW May 2016 Jewellery club box theme

* This is a joke.  They both rarely watch tv, have never been to the cinema, are unable to use a book and I won’t let them borrow my Kindle.

What do you want to say? Cancel reply

This site uses Akismet to reduce spam. Learn how your comment data is processed.